7 Startup Lessons from My Talk at TechCocktail Sessions – Matt Douglas

7 Startup Lessons from My Talk at TechCocktail Sessions

Last week I spoke at an event in Boston called TechCocktail Sessions. I was one of the two featured speakers. The first was Laura Fitton from Hubspot, who is best known as @pistachio on Twitter.

The topic of the talk was “Relationships Matter: Harnessing the Power of Your Network to Build Your Startup.” Laura went first, and she dished out a ton of useful advice with her typical enthusiastic energy. She’s a ball of fire, and it’s always great to hear her speak.

When it was my turn, I decided to tell stories. I started by going back to the very beginning of my entrepreneurial journey when I was just starting out. Over the hour I told a few stories, dispensed some advice, and answered questions. From what I can tell, it was well received.

As is typical for events like TechCocktail, there were people tweeting what I said during the session. And there was also this gem — an “infographic” of some of the things I mentioned. I thought I would use this post to provide a little more context behind these pithy insights. (A big hat tip to C. Todd Lambardo for his ‘Sketchnote’).

Lesson 1: Go to Event(s) If you want to get started down the entrepreneurial journey, then you have to start going to events. Lots of them. Back in the early days of 2005 and 2006 I went to a couple events per week. Yes, it was tiring — but necessary to get to know people in the ecosystem.

Lesson 2: Ask Questions The best way to engage with people is to ask questions. Don’t just focus on business questions — ask them where they grew up and if they have pets. Remember: first make a relationship, then do business.

Lesson 3: Do What You Say If you ask Lucy from Intel Capital, she’ll tell you that “Matt always did what he said he was going to do.” So each time I met with her I would tell her what I was going to do by the next time we met. And I always made sure that I delivered. Just do what you say you’re going to do… sounds simple, right? It can be harder than you think as you are juggling priorities and trying to get your startup off of the ground.

Lesson 4: Be an Asshole Well, that’s not quite what I said (even though I like it). What I really said was this: at some point in the process, you have to stop caring so much. Get an attitude. Project to the world that they are missing out if they don’t work with you. Let everyone know that you’re going to be successful whether they help you or not. If that’s what it means to be an asshole, then I wholeheartedly agree.

Lesson 5: Leverage Local Connections Ask people for introductions, and then use those meetings to make progress for your startup. In my case, we signed early deals with local companies such as Kayak, Vistaprint, and Boston.com. And then we leverage those deals to get big deals that really mattered.

Lesson 6: Great is Hard There is a HUGE difference between good and great. That applies to every facet of the business (employees, product, partners, service providers etc. etc). It’s really, really hard to be GREAT. If you are, everything else works itself out.

Lesson 7: There’s Money Under Your Ass Before the talk, I taped a $20 bill under one of the chairs in the second row (hat tip to Mark Weir for the idea). At the beginning of my talk, I asked people to fill up the first two rows because I don’t like having empty chairs in front of me. When I was wrapping up, I implored people to not miss opportunities that might be right underneath their nose (or ass). And then I told everyone to look underneath their chair. A woman named Susan found and got to keep $20. 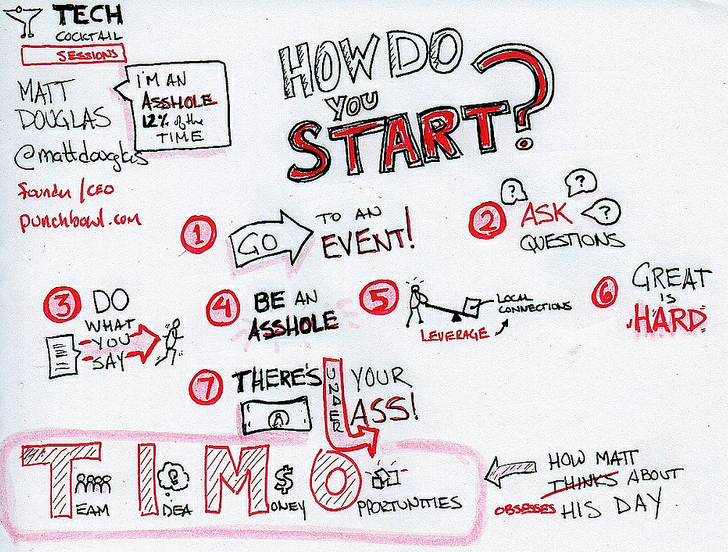 Thanks to the folks at TechCocktail for the opportunity to speak last week. The above Sketchnote is a fun recap of the talk. Thanks C Todd!

Warning: Unknown: Failed to write session data (files). Please verify that the current setting of session.save_path is correct (/var/lib/php5) in Unknown on line 0