Get the Right People on the Bus – Matt Douglas

Get the Right People on the Bus

Part II: The most important lesson I learned starting the Stingers

In the beginning of the 1995 academic year, things were really going pretty well for me. I was a senior on campus, lived in single dorm room close to the center of campus (Crosby), had a great girlfriend (now wife), and I was leading the new group I created called the Stingers. 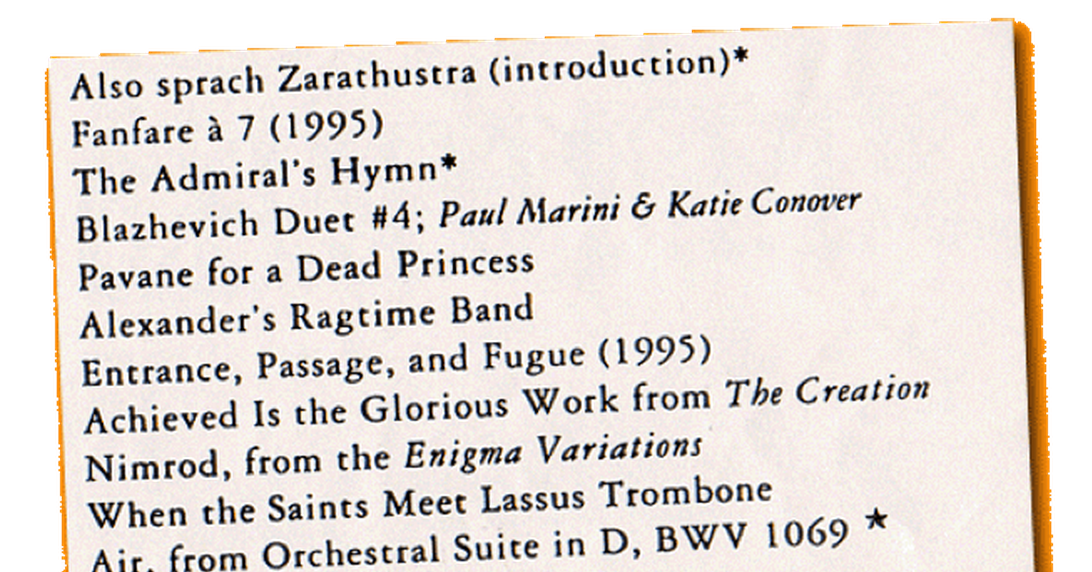 Classical music played by The Stingers

With renewed focus, I started the second year of leading the Stingers. But within a few weeks, I realized that things were different. The issues that I had let fester last year quickly reared their ugly head. A few members of the group dropped out, and the new ones that joined didn’t share my vision of ‘a cappella trombone.’ Newcomers like Paul Marini, Greg Reichlen and Carrie Ives were solid trombone players, but they weren’t on the same page about the purpose of the group. Like John Hendron and Michael Buchler, they wanted to play classical music such as “Achieved is the Glorious Work” from The Creation, Nimrod from the Enigma Variations, and other new pieces that Hendron had composed over the summer. I wanted to play popular music heard on Top 40 radio stations, and classic rock ‘n roll. I wanted to be like the singing group the Yellowjackets, but with trombones.

Things came to a head on November 15, 1995. We cancelled Wednesday practice and instead spent the time to meet as a group. I took copious notes, and after the meeting I produced a document which outlined each person’s responsibilities. I remember being very uncomfortable during the meeting as I tried to pander to everyone’s point of view. I was holding the group together with sheer determination, and I compromised everything I really believed. Consider a few of the awful notes that I wrote from that day:

•  Here’s a general outline of what I thought came out of Wednesday’s meeting. Note I am trying to choose my words carefully.

•  There will be no conductor, unless deemed necessary by the majority.

•  There is no “specific” music director(s). Some members will no doubt be more vocal than others, this is a result of their “expertise” in music.

•  Music selection and concert pieces will be determined by majority. Everyone has an equal voice.

•  Orlando/John: Solicit arranging ideas from the group. You guys are responsible for how we sound.

Looking back on it now, I had lost a grip on my vision long before that meeting. I was fighting a losing battle with a group of people that I hadn’t necessarily chosen. I took the path of “everyone is equal” when that wasn’t what I really believed would help make the best possible group. I learned the most important lesson: surrounding yourself with people doesn’t matter. You need to surround yourself with people who believe what you believe. The beginning of the end of my leadership of the Stingers happened long before we returned for school in the fall of 1995. I had lost the group the moment I decided to accept anyone into the group instead of only seeking out people who wanted to create an ‘a cappella’ group in the style of the YellowJackets.

I’ve taken this lesson with me to my start-up Punchbowl. Anyone who works here has gone through a comprehensive interview process that involves several conversations with me about how they approach work and what they are looking for in a career. I spend as much time as necessary to make sure they understand the vision of the company, and how we’ve been successful. And when people are hired, I make it clear to them that working with me is not a fucking democracy. Employees can always count on me for clear leadership and direction.

I always knew that I would be best suited as a leader when money, jobs, and livelihood was on the line. I believe that I’m a compassionate listener, but I also believe that decisions need to get made quickly and efficiently. True visionaries who have also been given the authority are the best leaders.

If you are running a group or a company, you need to make sure the right people are on the bus. Jim Collins wrote about this in the book ‘Good to Great‘: Leaders of companies that go from good to great start not with “where” but with “who.” They start by getting the right people on the bus, the wrong people off the bus, and the right people in the right seats. And they stick with that discipline—first the people, then the direction—no matter how dire the circumstances.

Looking back at the Stingers, we would have been a lot more successful if I had only allowed those that agreed with my vision to join the group. The biggest mistake I made was not having a vetting process to make sure the people who were joining understood what I was trying to do and were passionate about my vision.

One bad apple can create tension in a group or company. I’ve fired a few people from Punchbowl that were creating more problems than they were worth. In every case, it was a breathe of fresh air when they were removed and we no longer had to deal with their issues. They were the absolutely wrong people to have on the bus. Maybe if I had asked a few members of the Stingers to leave in the fall of 1995, we could have found way back to the original path and vision. But in a university-setting, it wasn’t really possible to kick people out of the group.

Sadly, for me the group started to be anything but fun. I tried to steer the ship, but it wasn’t the boat I had wanted to be on in the first place. Once again, I tried to convince others of my vision, but they had their own vision. The end of the Stingers was coming for me, and I didn’t want to face the truth.

KEY TAKEAWAY: Whether you are starting a new group or new company, the most important thing you need to do is to make sure the right people are on the bus. You must have a vetting process to figure out if you share the same vision. Remember: a small group with the right people is way more effective than a large group with differing visions. Stay tuned for Part III: My resignation from the Stingers.

Warning: Unknown: Failed to write session data (files). Please verify that the current setting of session.save_path is correct (/var/lib/php5) in Unknown on line 0